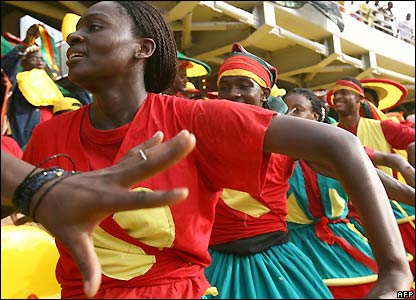 world cup mania is upon us once more and as you know (or not, as the case may be), the diva likes nothing more than a bit of armchair sporting mayhem. actually, i like a lot of things more but that’s another story. the internet is awash with predications and counter-predictions but the only opinion that really counts is right here.

so here’s my world cup round-up:

england and greece will make it out of their first round groups but will dismay their fans by not making out of the top 16. both sides will blame their loss on everyone but themselves.

cameroon will be the most cheerful of all the teams and there will be much music and dancing, even though they will be out early on.

one african team will make it through to the semi-finals. my money’s on south africa (home team advantage)

these predictions have been extremely carefully, almost scientifically, worked out but i bear no responsibility for any bets you might place based on my in-depth knowledge of the beautiful game. whatever happens, it’ll be a spectacular event and one that i am looking forward to following over the next month. i am one of those particularly irritating of football fans who loves the game but isn’t particularly bothered about who wins. i will be cheering on cameroon though, because they have the loveliest fans and i love rigobert song’s hair.

if any one of my predictions comes true, you may buy me a drink. if all of them prove correct, you can buy all my readers and myself a drink (all three of us). see you in our usual “big sporting event” outside spot on the 11th july.