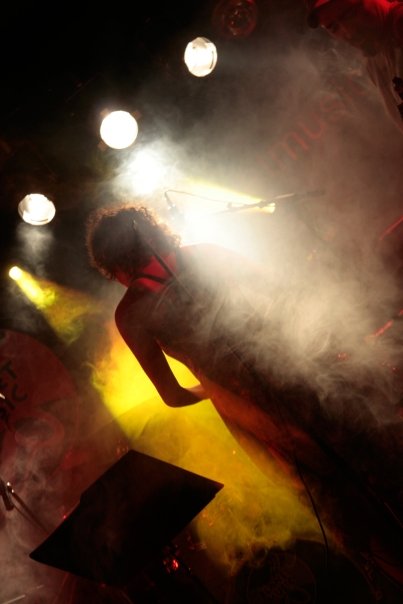 back in the day, when we were a struggling band (unlike now as we are poised for world domination), we were grateful for any gigs we could get. whether paid or unpaid, halfway up a mountain or at the old deserted airport playing to three drunk italians. nowadays, we are much more fussy but one thing remains the same. we like playing to an audience. don’t get me wrong, i love our friends and die-hard fans of the band who trek through torrential rain, dodge burning buildings and miraculously recover from illnesses to come and see us. what i don’t love is that it’s almost impossible to get more than two or three new people in through the door to see you play.

why? [click below to read more of this rant]

well, people are sheep. if there’s a new trendy spot that opens up in an already trendy area, even if it has the exact same white sofas and the same over-priced drinks and the same cute teenage girlies serving, people will go. in droves. because some trendy folk wrote in the trendy magazines, that it’s the next best thing. it’s corporate coolness.

independent thinking seems to be a thing of the past. apparently the cool people are all wearing the same garb, no matter how bad they look in it, they’ve all got tattoos and piercings, they listen to the same music, they go to the same bars and clubs, they follow the same tv series, they watch the same films.

again, don’t get me wrong, we’ve always had this phenomenon. sheep. but there were alternatives and alternatives were the cool thing. there were always people who never strayed from the mainstream but where are the rebels these days? buried and ignored by record companies who are too chicken-shit to put out anything that won’t sell millions or doesn’t “fit” into the usual boxes. unplayed by radio stations who have fired all the real dj’s in favour of automated playlists on a loop, unbooked by venues unless it’s a slow night like wednesday and the band can be counted on to bring in a hard-drinking posse of their own (love you guys).

so, i officially announce the coolness of uncool.

we’ve always been uncool and we’re very proud of it. we’re all old fogies mature. we’re all parents. none of us has a tattoo or an “unconventional” piercing. we’re all happier sitting about with mates over a gallon of wine than going to bars or clubs. none of us has a trendy piece of clothing in our wardrobe (although we all think we look pretty damn good on stage).

and our fans are the coolest uncool people out there. we have fans that knit their own accessories (how cute is that). fans that seriously don’t give a shit about “being seen” in the right places and would probably actively avoid those places. fans who know their own minds. who like things because they like them and not because they’ve been told they should. fans who can talk to you about anything from politics to bog brushes. fans who have opinions and can articulate them. fans who are like musical encyclopaedias, who still buy second-hand/bargain bin records by bands they’ve never heard of, on the off-chance of discovering a gem.

i know who i’d rather be playing to.