put this in your pipe 2 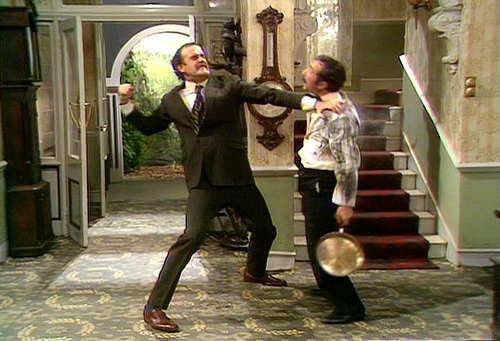 in my post the other day, listing blogs i find amusing, there were no british blogs. not one. the internet is dominated by american humour blogs and our daily lives are often overwhelmed by american culture. there are quite a few blogs dedicated to the subject of british humour but they mainly focus on how incomprehensible it is to americans.

so that got me thinking… a dangerous occupation in this heat… why is so much british humour incomprehensible to americans? here’s my thesis on the subject in one word: class

so much of what we find funny is based on class. we like nothing better than to take the piss out of upper class twits or bumbling, incompetent peasants. most of my favourite shows were based on the “class struggle”.

dad’s army,
fawlty towers,
absolutely fabulous,
to the manor born
blackadder
yes minister
are you being served
the good life
citizen smith
only fools and horses
much of monty python
and so on and so on.

[aside: i’m afraid i’ve been out of the country so long, i don’t know any of the present popular comedies very well but things like little britain and the royle family fall into this category. but let’s face it, the old stuff was so much better]

the americans do have a class system but it’s very different to ours. it seems theirs is based on income and ours on birth. we brits are not fooled by an oik making lorry loads of money and we can spot a dressed down poshie half a mile off. no. in blighty, you are born into a class and there you stay. that’s why we find people’s pathetic efforts to pass as a toff so hysterical. because it’s impossible to do.

and sorry folks, but speaking in a fake “street” accent (see catherine tate for the lingo) is fooling no-one.

deep thinking over. here’s a quick pick of some funny british blogs.

my boyfriend is a twat

The household is made up of myself, Zoe, an oasis of calm, Coralie, a 21 year-old stroppy little cow, her twin sister, Tatiana, who bosses the Twat and me around and winds up their brother Todd, a sixteen-year old with the attention span of a goldfish.

We have borrowed Big A’s baby names book, and I am bored with reading through it. It is basically just a list of names. Which is very useful and all that, but not incredibly interesting. All I can say is: show me a kid called ‘Aaron’ and I will show you some fucking lazy parents.

I am going Speed Dating!!

Ostensibly I am accompanying a female friend who wasn’t keen on doing it by herself, but essentially I will be a contestant (they’re called contestants, right?).  I tried this once before many years ago, but got very drunk, couldn’t remember people, and subsequently ended up going on a date with someone I really didn’t like very much.  This time I intend on being sober for most of it.

Girls. I am a complete catastrophe with them. The moment I fall for a girl I do stupid things like walking into trees or setting myself on fire in restaurants, and it just all goes terribly wrong.

take one woman with low self esteem, but quite good hair. add one moronic illness. stir in some medication which causes hair to fall out. mix it all up and this is what you get…

[two asides in one post! most of the popular humour blogs i’ve found in my travels have book deals. many are on bestseller lists. am i missing something? why would someone buy the book of a blog when they can read it for free online? where are the management™ when you need them?]