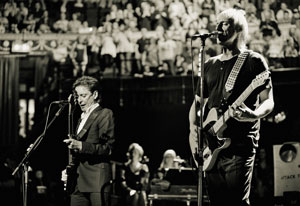 i read yesterday that paul weller (he of the jam who i absolutely loved back in the day) played the royal albert hall. now i know it was mr weller’s show and not the jam and i actually like him on his own, but the royal albert hall? i know, i know, tons of famous bods (including hendrix, sting jay z and the kaiser chiefs have played there but i find it odd. for me the royal albert is for ballet and classical music and eric clapton. not for the bad boys and girls of rock and roll. call me old fashioned but i like my bands up close and dirty. i understand stadium rock even though i never go. i can’t see the point of paying hundreds of quid to go and see bands and only being able to see them on a big screen. yeah, yeah, it’s the atmosphere bla bla and there are so many fans that they wouldn’t fit in a normal rock venue. i get it.

but the royal albert hall? it’s sedate and polite and nice. all the things that music shouldn’t be. especially not for someone who used to be in the jam. i like my rock idols to stay on the edge, to remain rebellious. but sadly, they either go the way of bono and paul weller (and countless others) or they self-destruct by the age of 27.

i do take my hat off to bowie and the rolling stones who have managed to survive this gentrification of music and have stayed (in my opinion) as exciting as they always were.

ps: i have a particular hatred of the royal albert hall because of the last night of the proms. this is when the hooray henrys and henriettas, let the peasants into their inner sanctum to get pissed and sing land of hope and glory. gives me shivers just thinking about it.

pps: in mr weller’s defence, he did live stream the gig and bruce foxton joined him on stage for the first time in 28 years