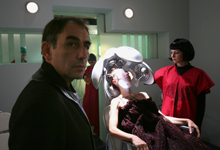 as you know (if you read here on a regular basis), we contributed one of our songs (sacrifice) to a film soundtrack. shoulder for hire is a futuristic film directed by the very wonderful and brilliant dimitris emmanouilidis and edited by the excessively talented kenan akkawi. it will have its stateside premiere on saturday 28th june 2008 at the spielberg theatre in los angeles as part of the greek film festival. the diva makes a brief appearance and vishy created some of the incidental music in the film. sacrifice plays in full at the very end and over the closing credits. the film has been winning awards around the place including the thessaloniki film festival (special prize for fiction), drama film festival (honorary distinction for the best sets to dimitris ziakas). as you know (again, if you read here on a regular basis), the film also won the prize for best soundtrack at the athens science fiction film festival earlier in the year (we have certificates to prove it).

how cool is that ?

if you happen to be in la on saturday, check it out.

[more details on the festival can be found here]