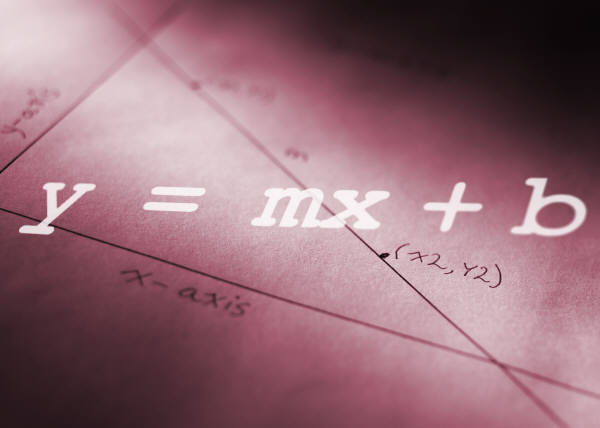 so the kid failed maths this year and i have the dubious pleasure of helping him get a pass so he can move on to the third year. yikes! we’re not called bad mathematics for nothing. what has been astounding about this whole process is that i’m finding that i’m not really as hopeless as i thought i was. i’m getting the kid to explain what he’s doing to me. this has two results. firstly, it makes it clearer to him and secondly, his dear old mum is starting to understand algebra!

before all you mathmaticians explode or start firing off angry letters to the management™, i would just like to point out that i do understand the reason why we are forced to learn this stuff. it stretches our brains and gives us a foundation for other boffin subjects like physics and chemistry blah blah blah. but. and it’s a big but. i know for a fact that i will never be in a situation where i have to actually use this knowledge. ok, i can work out how much i have to spend on each person if i have 24 quid and a party of eight to entertain but can mathematics tell me what to cook or how to use most the budget on booze? no. it’s woefully inadequate for preparing the next generation for real life. can maths help me choose between eating twiglets and chocolate for breakfast or having a hearty meal that will keep me going all day. no. not that there’s much difficulty in working out the right answer.

so, while i’m pleased that the kid is making headway towards passing his exam and i’m happy to add more useless information to my sorry excuse for a brain, i am desperately worried about this generation’s future if they are still having to learn this stuff. isn’t that why the eggheads invented computers? so they’d never have to put pen to paper or show working out? or learn? or think? i would like to propose that we scrap all traditional forms of education and just give kids laptops. everything you could possibly need or want to learn is on wikipedia and everything else can be found with google. there are facebook groups for absolutely everything from “we hate facebook” to “bad mathematics” and they could twitter and chat their lives away without the use of drugs and alcohol.

let’s save our children’s brains and give them carpel tunnel syndrome instead.

now i need to lie down.